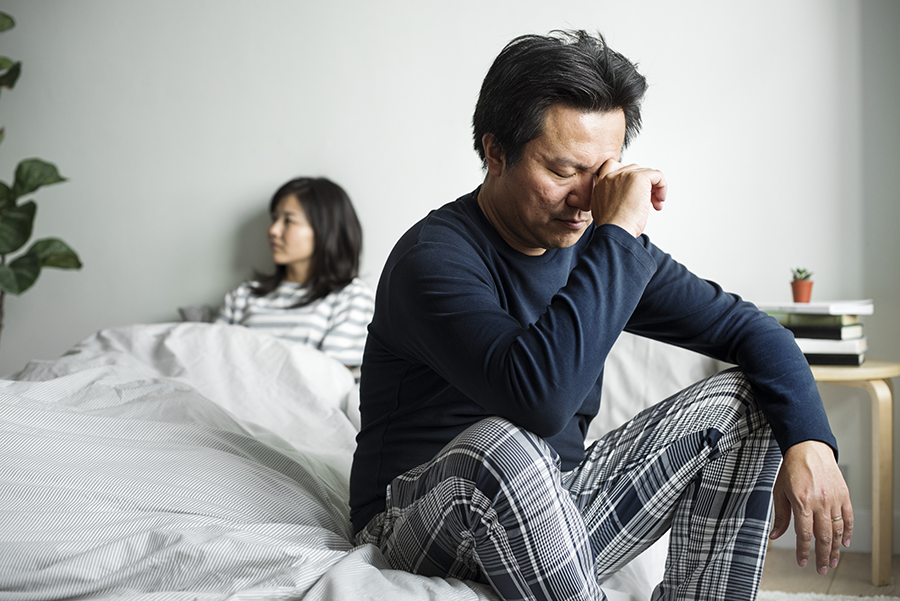 Getting older often comes with its own set of challenges and for over 42 million men in the United States,1,2 enlarged prostate or Benign Prostatic Hyperplasia (BPH), is one of them. The non-cancerous enlargement of the prostate occurs as men age and can cause a variety of bothersome urinary symptoms as the prostate presses on or blocks the urethra.

The private nature of BPH means that men may be reluctant to discuss their experience with it. The difficulties of interrupted sleep or problems in the bathroom can be challenging for men to discuss. So, it’s easy to understand that when it comes to challenges in the bedroom as a result of BPH, many men remain tight-lipped despite the depression and decreased quality of life that can accompany the condition.1

Unfortunately, the impacts to quality of life sometimes reach beyond just the BPH sufferer.

When BPH Puts a Damper on Romance

In two recent surveys of 1,000 men and 1,000 women over age 40 in the United States, 33% of respondents whose partner had been diagnosed with enlarged prostate said their partner’s BPH symptoms affect their sexual relationship.* 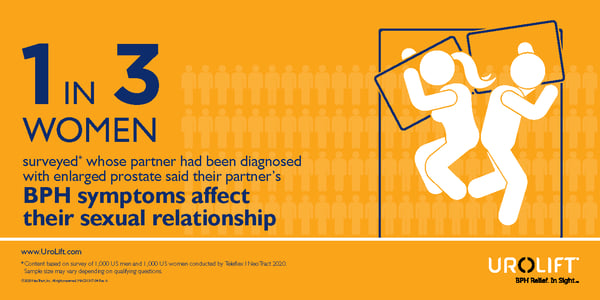 In fact, after nine years of suffering with BPH symptoms that were causing problems in the marital department, it was musician Corey B.’s wife who gave him the nudge he needed to take control of his condition. “My wife encouraged me to continue to look for alternative treatments. She’s why I kept fighting to find a treatment that would improve my symptoms.”

Unfortunately, some common treatment options can carry a risk of unpleasant sexual side effects.3 Sexual dysfunction resulting from BPH medications is one reason many men quit taking their prescriptions altogether.3,9

This was the case for patient Bob C., age 74, who suffered from BPH symptoms for over 10 years. His primary care physician prescribed BPH medications which lessened the frequency of waking at night to use the bathroom, but he was not happy with the worsening sexual side effects caused by taking pills. At one point, his doctor prescribed two different medications to try to relieve his BPH symptoms and this resulted in a complete restriction of his sexual activity. It was important to Bob to maintain a healthy sexual relationship with his wife and the BPH medications were making that difficult.

A Solution That May Keep the Spark Alive

The UroLift® System provides another alternative that allows many men to discontinue BPH medication and maintain their sexual function.**

Typically performed in an office setting under local anesthesia, the UroLift System does not require any cutting, heating or removal of prostate tissue, and many patients do not require catheterization.4

Surgical options such as the transurethral resection of the prostate (TURP) can be very effective in relieving symptoms, but can also leave patients with permanent side effects such as urinary incontinence and erectile dysfunction.3 Clinical data have also shown that the UroLift System offers significant symptom relief while being superior to the TURP surgical procedure at preserving sexual function and offering a more rapid recovery.6

The UroLift System is the only leading BPH procedure shown not to cause new onset, sustained erectile or ejaculatory dysfunction.3,7,8

After seeking medical advice from a urologist, Bob decided to undergo a UroLift System procedure which allowed him to discontinue his BPH medications completely just two weeks after his treatment. Bob (and his wife) are thrilled with the results.

Corey also decided to move forward with the UroLift System treatment. After the procedure, Corey and his wife waited two weeks to celebrate, although his symptoms improved in the first 48 hours following treatment. Corey’s wife says she feels like UroLift gave her back her husband. When asked about the UroLift System, Corey says “I would recommend this to anyone. Don’t be afraid!”†

* Content based on survey of 1000 US men and 1000 US women conducted by Teleflex | NeoTract 2020. Sample size may vary depending on qualifying questions.

** No instances of new, sustained erectile or ejaculatory dysfunction

† As with any medical procedure, individual results may vary.

Learn about the severity of your symptoms and available treatment options.